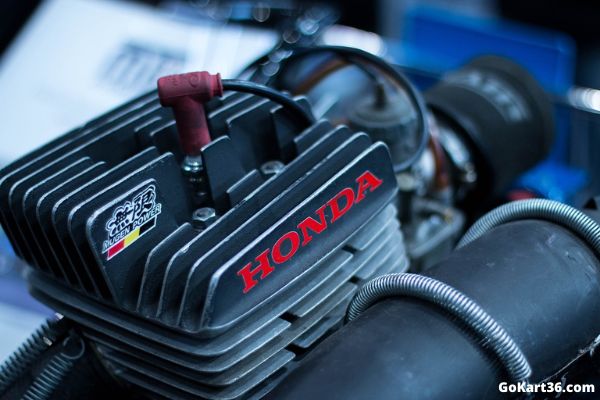 When you think about building your first go-kart, you must consider what engine you’ll buy. My experience with go-karts has helped me understand the variety of motors used in different leagues. But, how important are go-kart engines for the vehicle?

Go-kart engines are the most crucial part of a go-kart since a go-kart can’t run without an engine. So, getting the right one for your needs is essential.

I’ve included everything you’ll need to know about go-kart engines below. Depending on how serious you are about karting, I’ll also let you know about some of the best engines you can get.

What to Look For in Go-Kart Engines

Like every go-kart part, engines have many aspects that you’ll need to consider before buying one.

Go-kart engines are split into two major categories: 2-stroke engines and 4-stroke engines. These two come with many differences from a technical and a racing standpoint.

2-stroke engines are generally used in racing go-karts. As their names suggest, a power cycle is completed every two strokes. The fuel mix is pumped into the motor, and it combusts in two movements.

This comes with a lot of benefits. The main one is that the 2-stroke engines are lighter than the 4-stroke ones because they’re smaller. Also, their power output is higher, so they’re much faster than their 4-stroke counterparts.

But, 2-stroke engines are not eco-friendly since burnt oil from the fuel mix can come out of the exhaust. Also, despite being easier to maintain and fix, they get damaged easily because of the pressure.

4-stroke engines are more common in rental karts, and they’re the best choice for beginners. Unlike 2-stroke engines, 4-stroke ones come in many sizes and are usually cheaper. These engines require double the time to output power since a power cycle requires four strokes.

That being said, an engine’s size matters as much as its type.

The size of a go-kart engine is vital if you’re replacing an old one on your go-kart. A new motor can be too large for your chassis, or it might not be compatible with your kart’s clutch. So, knowing its exact measurements could save you a lot of money.

But, I think that most of you want to buy an all-new kart, rather than replace an old engine. In this case, you should know some commonly used go-kart engine sizes. I’ve also covered the speed of each one in a previous article.

50cc 2-stroke engines are the smallest ones used in go-karts. They’re usually made for kid racers that are new to karting. Some adults also use them since they can reach high speeds.

60cc engines are usually 2-stroke ones, and they can be pretty fast. These are the first real challenge for kid racers, and they often have a great power-to-size ratio. The most common 60cc engine used is the IAME Parilla Gazelle.

100cc engines can be 2-stroke and 4-stroke, but the 2-stroke ones are very common. I’ve heard about many leagues in Australia that use the IAME KA100, which is one of the best engines for new adult racers and teenagers.

The 125cc 2-stroke engines are the best in terms of their power output compared to their size. There are two versions of 125cc engines: direct-drive/TaG ones and shifter engines. Shifter 125cc engines are larger since they need to include a gearbox.

I keep getting messages from readers in the US who tell me about the Lo206 category. This class uses 206cc 4-stroke engines, which can go as fast as 125cc 2-stroke ones, but they’re nearly double the size.

270cc 4-stroke engines are among the most common ones used in rental karts. A great example of such an engine is the Honda GX270, which I’ve raced with numerous times. And, I can tell you that it’s speedy for how big it is.

390cc 4-stroke engines are very similar to 270cc ones. They are slightly faster, with some reaching speeds of 60-70mph (97-113 km/h) in the right conditions. 390cc go-karts are usually the fastest 4-stroke ones you can rent at a go-kart course.

Most of you might not know that go-karts have gears. Don’t worry; I didn’t know that before joining a local karting league. In fact, I found out that some go-karts don’t have a gearbox (direct-drive), while others have an automatic gearbox (TaG), and some have a manual one (shifter karts).

Direct-drive go-karts feature a simple design from a technical viewpoint. The engine is connected to the rear wheels directly. So, the higher the RPM, the faster the wheels spin, and the quicker the go-kart goes. That comes with a drawback; you’ll need to roll your go-kart for the engine to start, which can be challenging at times.

TaG (Touch and Go) engines are very common and simple to use. You’ll have to press a button on the wheel or the kart’s chassis, and the engine will start. These come with a centrifugal clutch or a torque converter.

I’ve already praised shifter karts many times, but here’s a brief explanation for them. Shifter karts are the closest to an actual car, and they are the epitome of karting, as they’re the fastest you can drive.

With that said, you’ll also have to consider the weight of your engine when you’re buying a new one.

Knowing how much your engine weighs is pretty important. Many karting leagues have strict weight restrictions, so an overweight engine will diminish your chances of racing in them.

But, that’s not the only issue with heavy engines. For performance and efficiency purposes, most engines above 150cc are 4-stroke (except for 250cc superkarts). So, 4-stroke karts are already much slower, and the added weight doesn’t favor them.

That said, a heavier engine will often provide better traction and handling. This might make you faster around the track, despite not reaching high speeds.

The durability of a go-kart engine is pretty tricky to understand. When you hear about durability, you probably think that the engine needs to be made from durable materials. That’s partially true.

For an engine to be durable, it must be made from a reliable brand and have excellent cooling. The most common issue with any go-kart engine is overheating, so by having a good air cooling system, you’ll ensure that the engine lasts.

The issue with engines is that you can’t really determine how long they’ll last. A 2-stroke engine can last for 20-30 races with the proper maintenance and repairs, while a 4-stroke one can do 40-50 races. But, if you don’t maintain it correctly, it’ll last for ten races at most.

Now, there are a few very reliable brands. But don’t expect an engine from a shady go-kart store that costs half the price of a Honda engine to last for more than two races.

Brands like Honda, Briggs and Stratton, DuroMax, Predator, and Tillotson, are very reliable for 4-stroke engines. Of course, more prominent names like Rotax, IAME, and Vortex are excellent choices for 2-stroke engines.

That said, price is a significant factor when it comes to go-kart engines.

Also, you could get used ones for less than that. But, this comes with additional costs for repairs and maintenance, which might cost you more than buying a new one.

How to Maintain Your Go-Kart Engine

I’m by no means a mechanic, but fellow drivers have told me that maintaining a go-kart engine is pretty simple and fun.

The main thing that you’ll have to do is keep everything lubricated and oiled up. You’ll need to ensure that the chain is lubricated before you get on the track; otherwise, the engine can break after a few laps.

You’ll also have to oil the engine after a few races. Along with oiling it up, you must ensure that the air filter on the motor is clean. If it’s clogged with dirt and debris, the engine will overheat often, and it’ll gradually get destroyed. Along with that, you need to clean every part of a go-kart engine after every session.

What Are the Best Go-Kart Engines

Since go-karting has many categories, no engine will work the best for each league. So, I thought it’d be great to include three of my favorite engines and rank them depending on who they’re for.

I was tempted to include the Predator 212cc engine, but I think that Honda has better reliability and power output. The GX series has the best 4-stroke engines, and the GX200 is the cheapest one, costing less than $400.

Most Rotax engines are 125cc, so you can choose any model that is allowed at your local league or championship. Generally, Rotax engines are the most reliable ones on the market; but they can cost between $2000-$3000.

Most Rotax engines have a top speed of 40-90mph (64-145 km/h), depending on the category. Also, as you go to higher classes, they also become heavier, but they’re still efficient.

You could also check out the IAME KA100, which is a lovely engine to have.

If you’re karting at a professional level, you’ve got to go for a shifter engine. I think that Rotax has the best shifter engine, but the Vortex Rok Shifter Engine is equally great. Both engines are extremely powerful, and they’ll set you back around $4000.

That’s all you need to know about go-kart engines. Keep in mind that you’ll have to do your own research based on your budget and racing aspirations. Once you’ve found a couple of engines that you like, you can check out all the factors I mentioned above to make the final decision.

What Engines Are Best for Go-Karts?

The best go-kart engines are different for every person. Most leagues run on a specific engine model, so you’ll usually not have a wide selection of motors to choose from.

What Engines Are Used for Go-Karts?